In last week’s post we were with the participants at the “Food as Cultural Heritage” workshop in Ioaninna, Epirus, where they had made Portokalopita, a team effort that was a total hit! The other two items made were Zimaropita and Bobota. The first one was an easy number two on the list of delicious food we ate that day but the bobota, now this turned out to be a food that came with a story. A story from a very long time ago when Greece was going through the pre WWII, depression era and food was scarce. We struggled to finish our helpings as the bobota spoke to us of the desperation of those times, and its bland, crumbly flavours made us reflect on our decision to make it. This rolled on to contemplating on life in general and it all turned into a supremely philosophical journey of reflection and self discovery!

So bobota’s tale starts at a time when corn was being used as an alternative to normal wheat and other kinds of grains in a pre WWII era, when foods like the Carob from Crete also gained popularity as it could be converted into a flour and syrup etc. Now in Epirus, which is the Northern part of Greece, bordering Albania, the mountains are harsh and allow for little to grow except for some herbs etc. SO this region was struggling to feed its people and bobota, was a bread of the poor. It is still eaten in many parts of Greece, like Larissa, which is also a mountain region close to Mt. Olympus. But for us, bobota was on the list of heritage food as the participants had never eaten it nor heard of it being prepared anywhere. In that way, it seemed like it was pretty much a forgotten, lost food. So to revive an old recipe and introduce the taste buds with something new, we set to work.

We made the bread sans embellishments but in my recipe below I will suggest additions to make it more flavouful for you. I have mixed the sweet and savoury flavours a bit but you can omit the sugar and orange juice if you want. I will not judge you 🙂

Mix the dry ingredients, (except the feta, sesame) together and wait for Godot…aha this was a trick to see how close you were really following 😉 Add the water, oil, orang juice and let the mix rest for a bit. We did not let ours rest and it was a bad idea. After about 15-20 mins, the mix should fall like a thick blob off your hand when you lift it and at this point, oil a baking dish and have a pre-heated oven at 180 C. Add the feta and chives then make dents in the mix with your fingers and sprinkle the sesame on this. Reduce oven to 150 C and stick the dish in and cook for about 20 minutes. The bobota will not rise much as it is supposed to be a normal bread and not a cake. We also added yeast to our mix which in retrospect was also another wrong decision, but then there were 10 of us instructing one girl who also had her own mind and it was all too much for the hapless bobota to bear. 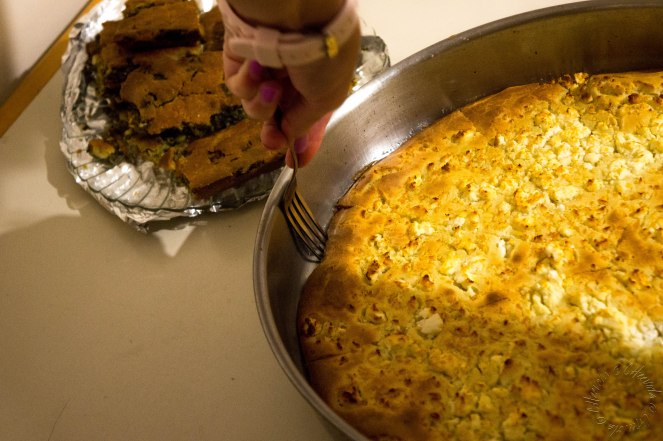 I would suggest you to serve it as an accompaniment to a salad with balsamic, tomatoes, peppers, some grilled aubergines and loads of fresh green lettuce and oodles of olive oil.

In the end the bobota- as you might have guessed by now, turned out to be one of the blandest foods any of us has ever eaten and we realised that we should have added more things to it. It got worse when the girl from Larissa spoke about how her mom made it and absolutely refused to touch our, sorry looking version! The bobota was like a dementor in the realm of food as it made us relive our worst memories and thus it showed us its philosophical side. But to think this food saved many was ultimately humbling and I lovingly ate it for the rest of my stay and won more admirers as I added salads and flavors to it, so more people could eat it without wanting to kill me!

NOTES: the bobota is a simple bread and needs an appreciative eye to value it. But dont let this discourage you. Remember, food is not always there to please us. Dry fish and vegemite also exist to torment us in other ways… 😉