The carob bean trade started around the 4th century BCE, making it one of the most sought after products around the Mediterranean. This pod which resembles a tamarind to us Asians, once  heavily influenced trade, farming practices, culinary cultures and its many medicinal properties were used to cure illnesses. It was mentioned in religious texts and stories of saints and other travelers that found sustenance and energy from this pod.  In modern day Greece however, it has an image that needs major refining as it oscillates between the statuses of an inferior product with locals in islands like Crete while a thriving, high end business, promotes it as a super food in urban areas. The carob was once known to save thousands of lives on islands like Crete in WWII as it was one of the only things available for the locals to eat, since the Germans had killed their livestock and prevented them from farming anything. So the locals took this strange looking pod from the trees, chewed it whole or boiled the mushy inside into a wholesome syrup or made flour out of the mush. Today, we have many products made out of the carob including things like pasta, jams, spreads and of course flour and chocolate. Known as the Chocolate of the Poor due to its close resemblance to the chocolate, the carob is also known as a super food. With 3 times more calcium and way too many antioxidants, I shall attempt to share a simple recipe with you today and continue with a few more in the upcoming days. 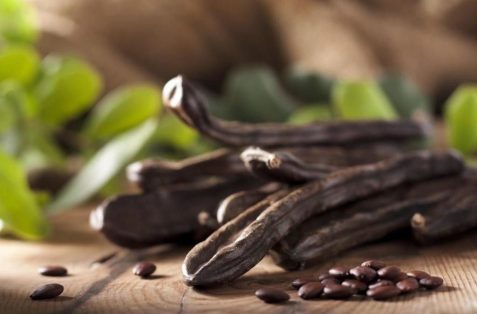 I used carob flour from Creta Carob which is a local company but you can source any carob flour that you may have access to.

Ingredients: I made about 3 cup cakes as I will be doing all the eating here so might as well go easy on myself! 🙂

Mix the eggs, sugar and lemon zest by whisking them for about 10-15 seconds. We dont want a very well whisked cake as we like the gluggy effect it leaves 🙂 In another bowl, mix the cake flour and carob flour with the baking powder to make sure they are well mixed. Now slowly add the flour mix into the egg mix and whisk them. Again remember, we just want a well mixed bowl but not a super whisked end product! SO give it another 15-20 seconds of leisurely or as I like to call it, lazy mixing 🙂 It is time to work on the flavoring so lightly roast the tea leaves with the cardamom as we want a heavy tea fragrance in the cup cakes. Now take your cup cake cases and after oiling the base a bit, pour in some cake mix, about 1 tbs then add some raisins and nuts and sprinkle enough tea leaves to cover a layer, add cardamom and some of the oats and 1 or 2 more spoonfulls of the cake mix, to make sure the case is half filled. You can only do the tea flavored one without the oats. Pre-heat oven at 180 deg C for about 10 mins then add the cup cakes and cook for about 15 mins. Keep checking as they rise. Turn off oven and leave in for another 10-15 mins then take out and let them cool within the cases.

Again, no whisking but a light (lazy!) mixing of Greek or thick yoghurt with thinly diced peaches, lather them onto the cup cake and you may add some honey to this or leave it plain as the cuppie is sweet enough I am assuming!

Remember to wow your guests or impress your family while biting into your cuppie, by telling them about how they used the carob seeds to weigh gem stones in the older days, hence we get the term “carat” gold or diamond, from its scientific name Ceratonia Siliqua…!!! 🙂